When the listener also creates the music… 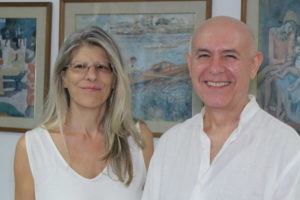 Ecto Music is a new way of offering and receiving music. The participants are no longer passive listeners, but they contribute actively to the creation of the event.
With proper preparation, deep relaxation is achieved and we reach that place where we are all One. The piano becomes the sound printer of the collective Consciousness and the music that “comes out” (“Ecto”, from ancient Greek) is created simultaneously by all the participants.
With the C tuned at 128 Hz, the piano also takes on the function of a dimensional gate, that allows us to travel in space-time and access new and unexplored dimensions.
The sounds we create, in this non-ordinary state of consciousness, are rebalancing, for us and for the noosphere.

Lorella
Designer and painter with intuitive and ecstatic abilities.
Her works are used in every Ecto Music CD front cover.
She studies non-ordinary states of consciousness and guides the preparatory phase of the Ecto Music experience, using Mantras and ancestral musical instruments, such as the Dhyangro (Nepali shamanic drum), the Tibetan bowls and the rain stick.
Since 1999 she has been practicing Maharishi’s Transcendental Meditation, a technique widely studied in science for its capability to generate “coherent brain waves”, that produce coherence in collective consciousness, and generate a unifying and integrating effect in the life of society (Maharishi effect).
Backbone of the Ecto Music project since 1989.

Fabio
Jazz musician, composer, researcher in the psycho-physical-energetic rebalancing field and in the research of non-ordinary states of consciousness, he is the creator of Ecto Music (a music created extemporaneously, without following any predefined melody, harmony or rhythm, which is composed by both the musician and the listener.
Fascinated by the keyboard musical instuments from early childhood, he begins classical piano studies. Attracted by the creative aspect of music, he takes his first steps in the world of jazz-rock and then moves on to acoustic jazz.
The particular research connected to the study of non-ordinary states of consciousness, cultivated since the age of 16, leads him to conceive in 1985 a new idea of concert: the participants are no longer a passive listeners, but actively contribute to the creation of the sound event.
Listeners are properly guided in order to bypass the critical attitude of the rational mind. This preparation creates highly coherent cerebral synchronization between the musician and the listeners, which results in sounds created by the “collective consciousness”.
This new way of involving the participants has a great rebalancing potential, from both a psycho-physical and an energetic point of view.
He cohoperates with hospitals, universities and research institutes, as a lecturer at conventions and conferences and also publishes for medical journals.
He is a professor of the Ecto Music Course, also for non-professional musicians.
He has been practicing Maharishi Transcendental Meditation since 1999.
He has been involved for years, both nationally and internationally, in the promotion of tuning C at 128 Hz.
He coordinates the Sound section of the EgoCreaNet Cluster, a research group at the Scientific Pole of the I.U.F. (Florentine University Incubator).

My life
At 8 years old I was given my first little organ. At 16, I realized that the reality we live in is nothing more than vibration, and that the only thing that really worth to apply in life was music. In particular I was fascinated by its creative aspect and improvisation became over time my specialty. At 27 I make a sensational discovery: reaching a particular state of non-ordinary consciousness I realize that i can improvise at the piano making me “drive” from the surrounding environment and, appropriately preparing any listeners, these become composers with me, contributing actively to the creation of Sound. Thus Ecto Music was born (from the greek Ektos: outside or from outside), the Music that “comes out” from the unified field! Many years have passed since then, and in countless carried meetings (concerts) emerged ever more the extraordinary rebalancing potential of this new approach to music: what makes the difference is the possibility to be co-creators of the music that we’re listening to! Of course for this to happen it is necessary to abide to certain parameters: participants must be able to take a very comfortable position, must be protected from cold, noise or movements, the light must be very low; all this to allow people to reach a very deep relaxation and create together a “Collective consciousness” which then, through my hands, “plays” the piano. Music also created by the listener, therefore, and not only: the environment with its energies and “invisible entities” becomes part of the “game”. And every time it’s a “miracle” … i never cease to thank the Universe for giving me this gift and this is my mission: to share and let try this wonderful experience of “union with the One” through Sound.